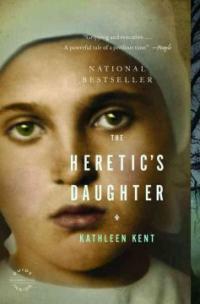 The Heretic's Daughter : A Novel (Paperback)

Martha Carrier was one of the first women to be accused, tried and hanged as a witch in . Like her mother, young Sarah Carrier is bright and willful, openly challenging the small, brutal world in which they live. Often at odds with one another, mother and daughter are forced to stand together against the escalating hysteria of the trials and the superstitious tyranny that led to the torture and imprisonment of more than 200 people accused of witchcraft. This is the story of Martha's courageous defiance and ultimate death, as told by the daughter who survived.
Kathleen Kent is a tenth generation descendent of Martha Carrier. She paints a haunting portrait, not just of Puritan New England, but also of one family's deep and abiding love in the face of fear and persecution.