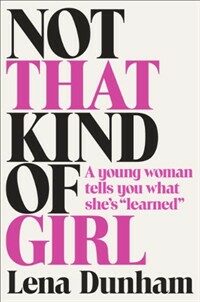 Not That Kind of Girl: A Young Woman Tells You What She's "Learned" (Hardcover)

NAMED ONE OF THE BEST BOOKS OF THE YEAR BY BUZZFEED, THE GLOBE AND MAIL, AND LIBRARY JOURNAL

For readers of Nora Ephron, Tina Fey, and David Sedaris, this hilarious, wise, and fiercely candid collection of personal essays establishes Lena Dunham—the acclaimed creator, producer, and star of HBO’s Girls—as one of the most original young talents writing today.

In Not That Kind of Girl, Dunham illuminates the experiences that are part of making one’s way in the world: falling in love, feeling alone, being ten pounds overweight despite eating only health food, having to prove yourself in a room full of men twice your age, finding true love, and most of all, having the guts to believe that your story is one that deserves to be told.

“Take My Virginity (No Really, Take It)” is the account of Dunham’s first time, and how her expectations of sex didn’t quite live up to the actual event (“No floodgate had been opened, no vault of true womanhood unlocked”); “Girls & Jerks” explores her former attraction to less-than-nice guys—guys who had perfected the “dynamic of disrespect” she found so intriguing; “Is This Even Real?” is a meditation on her lifelong obsession with death and dying—what she calls her “genetically predestined morbidity.” And in “I Didn’t F*** Them, but They Yelled at Me,” she imagines the tell-all she will write when she is eighty and past caring, able to reflect honestly on the sexism and condescension she has encountered in Hollywood, where women are “treated like the paper thingies that protect glasses in hotel bathrooms—necessary but infinitely disposable.”

Exuberant, moving, and keenly observed, Not That Kind of Girl is a series of dispatches from the frontlines of the struggle that is growing up. “I’m already predicting my future shame at thinking I had anything to offer you,” Dunham writes. “But if I can take what I’ve learned and make one menial job easier for you, or prevent you from having the kind of sex where you feel you must keep your sneakers on in case you want to run away during the act, then every misstep of mine will have been worthwhile.”

Praise for Not That Kind of Girl

“The gifted Ms. Dunham not only writes with observant precision, but also brings a measure of perspective, nostalgia and an older person’s sort of wisdom to her portrait of her (not all that much) younger self and her world. . . . As acute and heartfelt as it is funny.”—Michiko Kakutani, The New York Times

“It’s not Lena Dunham’s candor that makes me gasp. Rather, it’s her writing—which is full of surprises where you least expect them. A fine, subversive book.”—David Sedaris

“This book should be required reading for anyone who thinks they understand the experience of being a young woman in our culture. I thought I knew the author rather well, and I found many (not altogether welcome) surprises.”—Carroll Dunham

“Witty, illuminating, maddening, bracingly bleak . . . [Dunham] is a genuine artist, and a disturber of the order.”—The Atlantic

“As Dunham proves beyond a shadow of a doubt in Not That Kind of Girl, she’s not remotely at risk of offering up the same old sentimental tales we’ve read dozens of times.”—The Los Angeles Review of Books

The creator and star of HBO's