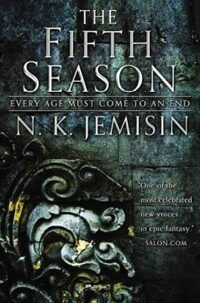 At the end of the world, a woman must hide her secret power and find her kidnapped daughter in this "intricate and extraordinary" Hugo Award winning novel of power, oppression, and revolution. (The New York Times)
This is the way the world ends...for the last time.
It starts with the great red rift across the heart of the world's sole continent, spewing ash that blots out the sun. It starts with death, with a murdered son and a missing daughter. It starts with betrayal, and long dormant wounds rising up to fester.

This is the Stillness, a land long familiar with catastrophe, where the power of the earth is wielded as a weapon. And where there is no mercy.

For more from N. K. Jemisin, check out:

A first entry in a new trilogy by the award-winning author of The Hundred Thousand Kingdoms finds the sole continent of the earth threatened by murder, betrayal, a super-volcano and overlords who use the planet's power as a weapon. Original. 25,000 first printing.

After the empire Sanze collapses and the vast continent Stillness becomes ravaged by a red rift which darkens the sky, Essun, whose daughter has been kidnapped by her murderous husband, crosses Stillness in a desperate attempt to save her daughter.