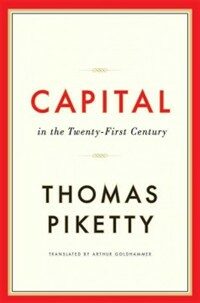 Capital in the Twenty-First Century (Hardcover)

“It seems safe to say that Capital in the Twenty-First Century, the magnum opus of the French economist Thomas Piketty, will be the most important economics book of the year?and maybe of the decade. Piketty, arguably the world’s leading expert on income and wealth inequality, does more than document the growing concentration of income in the hands of a small economic elite. He also makes a powerful case that we’re on the way back to ‘patrimonial capitalism,’ in which the commanding heights of the economy are dominated not just by wealth, but also by inherited wealth, in which birth matters more than effort and talent.”?Paul Krugman, New York Times

“A sweeping account of rising inequality… Eventually, Piketty says, we could see the reemergence of a world familiar to nineteenth-century Europeans; he cites the novels of Austen and Balzac. In this ‘patrimonial society,’ a small group of wealthy rentiers lives lavishly on the fruits of its inherited wealth, and the rest struggle to keep up… The proper role of public intellectuals is to question accepted dogmas, conceive of new methods of analysis, and expand the terms of public debate. Capital in the Twenty-first Century does all these things… Piketty has written a book that nobody interested in a defining issue of our era can afford to ignore.”?John Cassidy, New Yorker

“Bracing… Piketty provides a fresh and sweeping analysis of the world’s economic history that puts into question many of our core beliefs about the organization of market economies. His most startling news is that the belief that inequality will eventually stabilize and subside on its own, a long-held tenet of free market capitalism, is wrong. Rather, the economic forces concentrating more and more wealth into the hands of the fortunate few are almost sure to prevail for a very long time.” Eduardo Porter, New York Times

“[A] magnificent, sweeping meditation on inequality… The big idea of Capital in the Twenty-First Century is that we haven’t just gone back to nineteenth-century levels of income inequality, we’re also on a path back to ‘patrimonial capitalism,’ in which the commanding heights of the economy are controlled not by talented individuals but by family dynasties… Piketty has written a truly superb book. It’s a work that melds grand historical sweep?when was the last time you heard an economist invoke Jane Austen and Balzac??with painstaking data analysis… A tour de force of economic modeling, an approach that integrates the analysis of economic growth with that of the distribution of income and wealth. This is a book that will change both the way we think about society and the way we do economics… Capital in the Twenty-First Century is, as I hope I’ve made clear, an awesome work. At a time when the concentration of wealth and income in the hands of a few has resurfaced as a central political issue, Piketty doesn’t just offer invaluable documentation of what is happening, with unmatched historical depth. He also offers what amounts to a unified field theory of inequality, one that integrates economic growth, the distribution of income between capital and labor, and the distribution of wealth and income among individuals into a single frame… Capital in the Twenty-First Century makes it clear that public policy can make an enormous difference, that even if the underlying economic conditions point toward extreme inequality, what Piketty calls ‘a drift toward oligarchy’ can be halted and even reversed if the body politic so chooses… His masterwork… Sometimes it seems as if a substantial part of our political class is actively working to restore Piketty’s patrimonial capitalism. And if you look at the sources of political donations, many of which come from wealthy families, this possibility is a lot less outlandish than it might seem… [A] masterly diagnosis of where we are and where we’re heading… Capital in the Twenty-First Century is an extremely important book on all fronts. Piketty has transformed our economic discourse; we’ll never talk about wealth and inequality the same way we used to.”?Paul Krugman, New York Review of Books