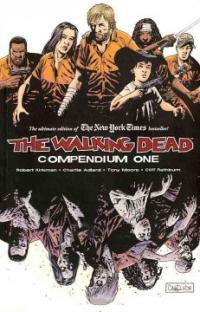 "An epidemic of apocalyptic proportions has swept the globe causing the dead to rise and feed on the living. In a matter of months society has crumbled-- no government, no grocery stores, no mail delivery, no cable TV. In a world ruled by the dead, we are forced to finally start living" -- p. [4] of cover.

Introducing the first eight volumes of the fan-favorite, New York Times Best Seller series collected into one massive paperback collection! Collects The Walking Dead #1-48. This is the perfect collection for any fan of the Emmy Award-winning television series on AMC: over one thousand pages chronicling the beginning of Robert Kirkman''s Eisner Award-winning continuing story of survival horror- from Rick Grimes'' waking up alone in a hospital, to him and his family seeking solace on Hershel''s farm, and the controversial introduction of Woodbury despot: The Governor. In a world ruled by the dead, we are finally forced to finally start living.