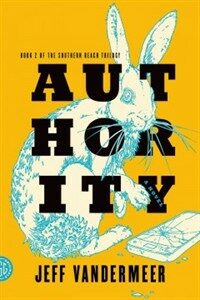 After thirty years, the only human engagement with Area X?a seemingly malevolent landscape surrounded by an invisible border and mysteriously wiped clean of all signs of civilization?has been a series of expeditions overseen by a government agency so secret it has almost been forgotten: the Southern Reach. Following the tumultuous twelfth expedition chronicled in Annihilation, the agency is in complete disarray.

John Rodrigues (aka "Control") is the Southern Reach's newly appointed head. Working with a distrustful but desperate team, a series of frustrating interrogations, a cache of hidden notes, and hours of profoundly troubling video footage, Control begins to penetrate the secrets of Area X. But with each discovery he must confront disturbing truths about himself and the agency he's pledged to serve.

In Authority, the New York Times bestselling second volume of Jeff VanderMeer's Southern Reach trilogy, Area X's most disturbing questions are answered . . . but the answers are far from reassuring.

John Rodriguez, the new head of a secret agency tasked to monitor Area X?a lush and remote terrain mysteriously sequestered from civilization?is faced with disturbing truths about himself and the agency he has sworn to serve when the secrets of Area X begin to reveal themselves. Original. 50,000 first printing.

"In the second volume of the Southern Reach Trilogy, questions are answered, stakes are raised, and mysteries are deepened. In Annihilation, Jeff VanderMeer introduced Area X--a remote and lush terrain mysteriously sequestered from civilization. This was the first volume of a projected trilogy; well in advance of publication, translation rights had already sold around the world and a major movie deal had been struck. Just months later, Authority, the second volume, is here. For thirty years, the only human engagement with Area X has taken the form of a series of expeditions monitored by a secret agency called the Southern Reach. After the disastrous twelfth expedition chronicled in Annihilation, the Southern Reach is in disarray, and John Rodriguez, aka "Control," is the team's newly appointed head. From a series of interrogations, a cache of hidden notes, and hours of profoundly troubling video footage, the secrets of Area X begin to reveal themselves--and what they expose pushes Control to confront disturbing truths about both himself and the agency he's promised to serve. And the consequences will spread much further than that. The Southern Reach trilogy will conclude in fall 2014 with Acceptance"--

"In the second volume of the Southern Reach trilogy, Area X's most troubling questions are answered... but the answers are far from reassuring"--

John Rodriquez, head of the secret agency Southern Reach, is charged with exploring Area X, a remote area sequestered from civilization, as his team exposes disturbing truths about the area, with far-reaching consequences for himself and his agency.