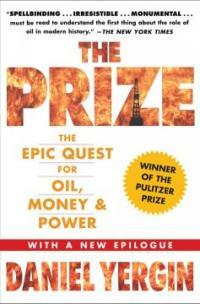 The Prize: The Epic Quest for Oil, Money & Power (Paperback)

Now with a new epilogue that speaks directly to the current energy crisis, The Prize recounts the panoramic history of the world's most important resource: oil. Daniel Yergin's timeless book chronicles the struggle for wealth and power that has surrounded oil for decades and that continues to fuel global rivalries, shake the world economy, and transform the destiny of men and nations. This updated edition categorically proves the unwavering significance of oil throughout the twentieth century and into the twenty-first by tracing economic and political clashes over precious "black gold."

With his far-reaching insight and in-depth research, Yergin is uniquely positioned to address the present battle over energy, which undoubtedly ranks as one of the most vital issues of our time. The canvas of his narrative history is enormous -- from the drilling of the first well in Pennsylvania through two great world wars to the Iraqi invasion of Kuwait, Operation Desert Storm, and now both the Iraq War and climate change. The definitive work on the subject of oil, The Prize is a book of extraordinary breadth, riveting excitement, and great value -- crucial to our understanding of world politics and the economy today -- and tomorrow.