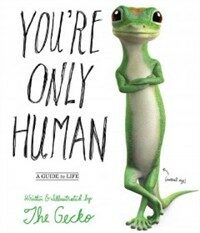 You're Only Human: A Guide to Life (Paperback)

At last, The Gecko has written a book!You know him and love him as one of the most famous characters on television, that humble, hardworking spokeslizard with the fetching accent. Turns out there’s so much more to him. He’s a philosopher, an aphorist, a humorist, an artist, a warm companion, a natural storyteller?and, in a grand tradition, a keenly observant and wise outsider who in the course of living and traveling among us has discovered quite a lot about the things that make us human. Figuratively speaking, of course. You’re Only Human is his brilliant take on people, written and illustrated with considerable charm.He makes curious and interesting observations on everything from dreams to job interviews to adversity, Twitter to the Golden Rule (it’s not what you think it is) to talking animals: I’m really not sure what all the fuss is about. Lots of animals talk, including humans. The bigger question is, what do you have to say worth listening to?Up until now, it’s fair to say the main reason we feel we know The Gecko so well is that GEICO spends millions on advertising. You’re Only Human will change that, revealing a remarkable character who is equally at home discussing the secrets of the universe, and pie and chips. How lucky we are to publish his first book.