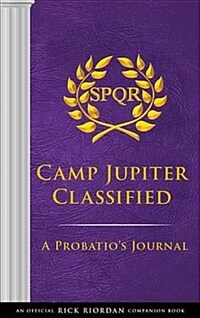 It's the February after Gaea's defeat, and mysterious incidents are wreaking havoc throughout Camp Jupiter. If the Romans don't figure out who--or what--is behind the episodes soon, the Twelfth Legion could implode.
Suspicion falls on Claudia, the Fourth Cohort's newest probatio. After all, the mischief started shortly after she stumbled into camp. Plus, she's a daughter of Mercury, the god of thieves and tricksters.
To find out whether she's guilty or innocent, readers can delve into the pages of Claudia's personal journal. Through her eyewitness accounts, they will visit the crime scenes--a row of seats in the Coliseum, an underground aqueduct tunnel, the strange staircase at the back of the principia--and see the bizarre events unfold. They'll be right alongside Claudia when she discovers a secret so ancient that not even the lares know about it . . . a secret that holds the key to Camp Jupiter's safety.

An official companion to the Trials of Apollo series finds Mercury?s trickster daughter, Claudia, a new probatio at Camp Jupiter, documenting mysterious events in her journal, inviting readers to determine her guilt or innocence. 250,000 first printing.

"When mysterious incidents start wreaking havoc throughout Camp Jupiter, suspicion falls on the Fourth Cohort's newest probatio. But is she really to blame? Find out the truth by delving into the pages of her personal journal"--