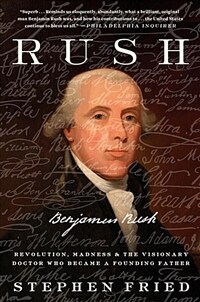 The monumental life of Benjamin Rush, medical pioneer and one of our most provocative and unsung Founding Fathers
&#160;
FINALIST FOR THE GEORGE WASHINGTON BOOK PRIZE &; AMERICAN LIBRARY ASSOCIATION NOTABLE BOOK OF THE YEAR
&#160;
By the time he was thirty, Dr. Benjamin Rush had signed the Declaration of Independence, edited&#160;Common Sense,&#160;toured Europe as Benjamin Franklin&;s prot&#233;g&#233;, and become John Adams&;s confidant, and was soon to be appointed Washington&;s surgeon general. And as with the greatest Revolutionary minds, Rush was only just beginning his role in 1776 in the American experiment. As the new republic coalesced, he became a visionary writer and reformer; a medical pioneer whose insights and reforms revolutionized the treatment of mental illness; an opponent of slavery and prejudice by race, religion, or gender; an adviser to, and often the physician of, America&;s first leaders; and &;the American Hippocrates.&;&#160;Rush&#160;reveals his singular life and towering legacy, installing him in the pantheon of our wisest and boldest Founding Fathers.
&#160;
Praise for&#160;Rush
&#160;
&;Entertaining . . . Benjamin Rush has been undeservedly forgotten. In medicine . . . [and] as a political thinker, he was brilliant.&;&;The New Yorker
&#160;
&;Superb . . . reminds us eloquently, abundantly, what a brilliant, original man Benjamin Rush was, and how his contributions to . . . the United States continue to bless us all.&;&;The Philadelphia Inquirer
&#160;
&;Perceptive . . . [a] readable reassessment of Rush&;s remarkable career.&;&;The Wall Street Journal
&#160;
&;An amazing life and a fascinating book.&;&;CBS This Morning

&;Fried makes the case, in this comprehensive and fascinating biography, that renaissance man Benjamin Rush merits more attention. . . . Fried portrays Rush as a complex, flawed person and not just a list of accomplishments; . . . a testament to the authorial thoroughness and insight that will keep readers engaged until the last page.&;&;Publishers Weekly&#160;(starred review)

&;[An] extraordinary and underappreciated man is reinstated to his rightful place in the canon of civilizational advancement in Rush. . . . Had I read Fried&;s&#160;Rush&#160;before the year&;s end, it would have crowned my favorite books of 2018 . . . [a] superb biography.&;&;Brain Pickings

"The remarkable story of Benjamin Rush, medical pioneer and one of our nation's most provocative and unsung Founding Fathers ... One of the youngest signatories [of the Declaration of Independence] ... he was also, among stiff competition, one of the most visionary. A brilliant physician and writer, Rush was known as the "American Hippocrates" for pioneering national healthcare and revolutionizing treatment of mental illness and addiction. Yet medicine is only part of his legacy. Dr. Rush was both a progressive thorn in the side of the American political establishment--a vocal opponent of slavery, capital punishment, and prejudice by race, religion or gender--and close friends with its most prominent leaders. He was the protaegae of Franklin, the editor of Common Sense, Washington's surgeon general, and the broker of peace between Adams and Jefferson, yet his stubborn convictions more than once threatened his career and his place in the narrative of America's founding. Drawing on a trove of previously unpublished letters and images, the voluminous correspondence between Rush and his better-known counterparts, and his candid and incisive personal writings ... Stephen Fried ... finally installs Dr. Rush in the pantheon of great American leaders."--Providedby publisher.

A portrait of the medical pioneer and founding father discusses his work in national health care and the treatment of mental illness, his vocal opposition to slavery, and his relationships with Washington, Franklin, and other founders.