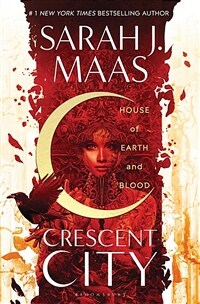 House of Earth and Blood (Hardcover)

Sarah J. Maas's brand-new CRESCENT CITY series begins with House of Earth and Blood: the story of half-Fae and half-human Bryce Quinlan as she seeks revenge in a contemporary fantasy world of magic, danger, and searing romance.

Bryce Quinlan had the perfect life?working hard all day and partying all night?until a demon murdered her closest friends, leaving her bereft, wounded, and alone. When the accused is behind bars but the crimes start up again, Bryce finds herself at the heart of the investigation. She?ll do whatever it takes to avenge their deaths.

Hunt Athalar is a notorious Fallen angel, now enslaved to the Archangels he once attempted to overthrow. His brutal skills and incredible strength have been set to one purpose?to assassinate his boss?s enemies, no questions asked. But with a demon wreaking havoc in the city, he?s offered an irresistible deal: help Bryce find the murderer, and his freedom will be within reach.

As Bryce and Hunt dig deep into Crescent City?s underbelly, they discover a dark power that threatens everything and everyone they hold dear, and they find, in each other, a blazing passion?one that could set them both free, if they?d only let it.

Seeking oblivion in nightclubs in the aftermath of a shattering loss, half-fae Bryce is unwittingly dragged into a murder investigation at the side of a Fallen angel. By the best-selling author of the Throne of Glass series.

"Half-Fae, half-human Bryce Quinlan loves her life. By day, she works for an antiquities dealer, selling barely legal magical artifacts, and by night, she parties with her friends, savoring every pleasure Lunathion-otherwise known as Crescent City-has tooffer. But it all comes crumbling down when a ruthless murder shakes the very foundations of the city-and Bryce's world. Two years later, her job has become a dead end, and she now seeks only blissful oblivion in the city's most notorious nightclubs. Butwhen the murderer attacks again, Bryce finds herself dragged into the investigation and paired with an infamous Fallen angel whose own brutal past haunts his every step. Hunt Athalar, personal assassin for the Archangels, wants nothing to do with Bryce Quinlan, despite being ordered to protect her. She stands for everything he once rebelled against and seems more interested in partying than solving the murder, no matter how close to home it might hit. But Hunt soon realizes there's far more to Bryce thanmeets the eye-and that he's going to have to find a way to work with her if they want to solve this case. As Bryce and Hunt race to untangle the mystery, they have no way of knowing the threads they tug ripple through the underbelly of the city, across warring continents, and down to the darkest levels of Hel, where things that have been sleeping for millennia are beginning to stir.."--