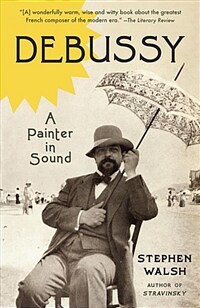 A beautifully written biography of one of our greatest, most popular modern composers--and an investigation of his much-loved music--from the acclaimed author of Stravinsky. Claude Debussy (1862-1918) achieved something few other composers can boast of: he reinvented the language of music without alienating the majority of music lovers. As a central figure at the birth of modernism, driving French music into entirely new regions of beauty and excitement at a time when old traditions--and the overbearing influence of Wagner--threatened to stifle it, Debussy's influence on French culture was profound. Yet at the same time his own life was complicated and often troubled by struggles over money, women, and ill health. Now, over a hundred years after his death, biographer Stephen Walsh turns his keen eye to both the composer and the unique moment in European history that bore him. Walsh's engagingly original approach is to enrich a lively account of this life with brilliant analyses of Debussy's music: from his first daring breaks with the rules as a Conservatoire student to his mature achievements as the greatest French composer of his time.