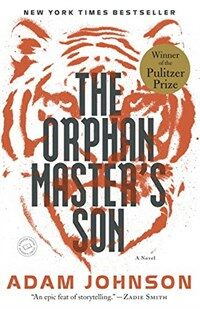 WINNER OF THE PULITZER PRIZEIn this epic, critically acclaimed tour de force, Adam Johnson provides a riveting portrait of a world rife with hunger, corruption, and casual cruelty but also camaraderie, stolen moments of beauty, and love.NATIONAL BOOK CRITICS CIRCLE AWARD FINALIST ? LONGLISTED FOR THE AMERICAN LIBRARY ASSOCIATION’S ANDREW CARNEGIE MEDAL ? WINNER OF THE CALIFORNIA BOOK AWARD FOR FICTION ? NEW YORK TIMES BESTSELLERNAMED ONE OF THE BEST BOOKS OF THE YEAR BY The Washington Post ? Entertainment Weekly ? The Wall Street Journal ? Los Angeles Times ? San Francisco Chronicle ? Financial Times ? Newsweek/The Daily Beast ? The Plain Dealer ? St. Louis Post-Dispatch ? Milwaukee Journal Sentinel ? Slate ? Salon ? BookPage ? Shelf Awareness “The single best work of fiction published in 2012 . . . The book’s cunning, flair and pathos are testaments to the still-formidable power of the written word.”?The Wall Street JournalPak Jun Do is the haunted son of a lost mother?a singer “stolen” to Pyongyang?and an influential father who runs a work camp for orphans. Superiors in the state soon recognize the boy’s loyalty and keen instincts. Considering himself “a humble citizen of the greatest nation in the world,” Jun Do rises in the ranks. He becomes a professional kidnapper who must navigate the shifting rules, arbitrary violence, and baffling demands of his Korean overlords in order to stay alive. Driven to the absolute limit of what any human being could endure, he boldly takes on the treacherous role of rival to Kim Jong Il in an attempt to save the woman he loves, Sun Moon, a legendary actress “so pure, she didn’t know what starving people looked like.”Praise for The Orphan Master’s Son“An exquisitely crafted novel that carries the reader on an adventuresome journey into the depths of totalitarian North Korea and into the most intimate spaces of the human heart.”?Pulitzer Prize citation“A daring and remarkable novel.”?Michiko Kakutani, The New York Times“Gripping . . . Deftly blending adventure, surreal comedy and Casablanca-style romance, the novel takes readers on a jolting ride through an Orwellian landscape of dubious identity and dangerous doublespeak.”?San Jose Mercury News“This is a novel worth getting excited about. . . . Adam Johnson has taken the papier-mache creation that is North Korea and turned it into a real and riveting place that readers will find unforgettable.”?The Washington Post“[A] brilliant and timely novel.”?The Wall Street Journal“Remarkable and heartbreaking . . . To [the] very short list of exceptional novels that also serve a humanitarian purpose The Orphan Master’s Son must now be added.”?The New Republic“A triumph of imagination . . . [Grade:] A.”?Entertainment Weekly“A spellbinding saga of subverted identity and an irrepressible love.”?VogueLook for special features inside. Join the Random House Reader’s Circle for author chats and more.