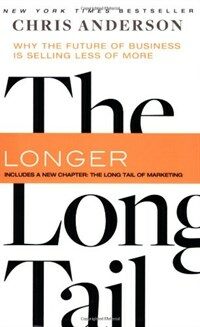 The Long Tail: Why the Future of Business Is Selling Less of More (Paperback, Revised, Update)

Now in a revised and updated edition, The Long Tail is an examination of the phenomenon Chris Anderson, the editor-in-chief of Wired magazine, first wrote about in the September 2004 issue in which he presented a powerful truth about the new economics of business in the digital age based on unlimited supply. This is a must-read for anyone trying to position their companies for a 21st century marketplace, along with being a mind-expanding read for consumers and producers alike.

The New York Times bestseller that introduced the business world to a future that's already here--now in paperback with a new chapter about Long Tail Marketing and a new epilogue. Winner of the Gerald Loeb Award for Best Business Book of the Year In the most important business book since The Tipping Point, Chris Anderson shows how the future of commerce and culture isn't in hits, the high-volume head of a traditional demand curve, but in what used to be regarded as misses--the endlessly long tail of that same curve. "It belongs on the shelf between The Tipping Point and Freakonomics." --Reed Hastings, CEO, Netflix "Anderson's insights . . . continue to influence Google's strategic thinking in a profound way." --Eric Schmidt, CEO, Google "Anyone who cares about media . . . must read this book." --Rob Glaser, CEO, RealNetworks