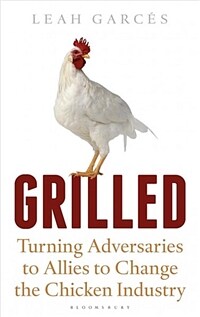 This is the story of Leah Garc s's fight for better treatment of farmed animals, as she works with farmers, suppliers and restaurant chains to end factory farming for good.

Leah Garc s has committed her career to fighting for the rights of the animals that end up on our plates. As President of the nonprofit group Mercy for Animals and former US Executive Director of Compassion in World Farming, she has led the fight against the sprawling chicken industry that raises billions of birds in cruel conditions--all to satisfy the American appetite for meat.

Grilled: Turning Adversaries into Allies to Change the Chicken Industry is her story of working alongside the food and farming industry for animal welfare and ethical food. Instead of fighting and protesting and shaming--approaches that simply haven't worked previously--Garc s has instead gotten to know the producers. She has worked alongside owners of the megafarms, befriending them, having frank conversations with them, and ultimately encouraging change through dialogue and discussion. Leah is changing the way America farms her animals through this bold approach, and is helping to directly improve the lives of millions of farmed animals.

When she started her journey, Leah did not have much empathy to spare for the chicken-contract farmer--until she actually met one and tried to understand the difficulties they faced. This is the story of what happens when we cross enemy lines to look for solutions. It's a story of giving in to discomfort for the sake of progress. It's a story of the power of human connection, and what happens when we practice empathy toward our enemies.