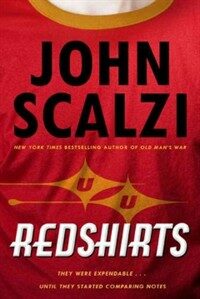 Ensign Andrew Dahl has just been assigned to the Universal Union Capital Ship Intrepid, flagship of the Universal Union since the year 2456. It's a prestige posting, with the chance to serve on Away Missions alongside the starship's famous senior officers.

Life couldn't be better...until Andrew begins to realize that 1) every Away Mission involves a lethal confrontation with alien forces, 2) the ship's senior officers always survive these confrontations, and 3) sadly, at least one low-ranking crew member is invariably killed. Unsurprisingly, the savvier crew members below decks avoid Away Missions at all costs.

Then Andrew stumbles on information that transforms his and his colleagues' understanding of what the starship Intrepid really is...and offers them a crazy, high-risk chance to save their own lives.

Redshirts by John Scalzi is the winner of the 2013 Hugo Award for Best Novel.