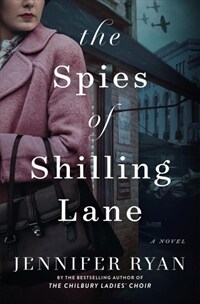 The Spies of Shilling Lane (Hardcover)

From the bestselling author of&#160;The Chilbury Ladies&; Choir&#160;comes a thrilling new WWII story about a village busybody&;the mighty Mrs. Braithwaite&;who resolves to find, and then rescue, her missing daughter
&#160;
Mrs. Braithwaite, self-appointed queen of her English village, finds herself dethroned, despised, and dismissed following her husband&;s selfish divorce petition. Never deterred, the threat of a family secret being revealed sets her hot-foot to London to find the only person she has left&;her clever daughter Betty, who took work there at the first rumbles of war.
&#160;
But when she arrives, Betty&;s landlord, the timid Mr. Norris, informs her that Betty hasn&;t been home in days--with the chaos of the bombs, there&;s no telling what might have befallen her. Aghast, Mrs. Braithwaite sets her bullish determination to the task of finding her only daughter.
&#160;
Storming into the London Blitz, Mrs. Braithwaite drags the reluctant Mr. Norris along as an unwitting sidekick as they piece together Betty&;s unexpectedly chaotic life. As she is thrown into the midst of danger and death, Mrs. Braithwaite is forced to rethink her old-fashioned notions of status, class, and reputation, and to reconsider the question that&;s been puzzling her since her world overturned: How do you measure the success of your life?
&#160;
Readers will be charmed by the unforgettable Mrs. Braithwaite and her plucky, ruthless optimism, and find in The Spies of Shilling Lane a novel with surprising twists and turns, quiet humor, and a poignant examination of mothers and daughters and the secrets we keep.

A follow-up to The Chilbury Ladies' Choir finds scandalous divorcee Mrs. Braithwaite traveling to World War II London in search of her missing daughter, an effort that is complicated by a difficult secret.

Dethroned as the self-appointed queen of her village when her husband divorces her, Mrs. Braithwaite travels to London at the height of the blitz in search of her missing daughter, an effort that is complicated by a difficult secret.