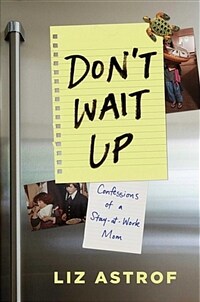 Don't Wait Up: Confessions of a Stay-At-Work Mom (Hardcover)

For fans of Let's Pretend This Never Happened and I Heart My Little A-Holes comes a candid and hilarious collection of essays on motherhood from the award-winning television comedy writer and producer of 2 Broke Girls and The King of Queens, who swears she loves her kids--when she's not hiding from them. Some women feel that motherhood is a calling and their purpose on earth. They somehow manage to make pregnancy look effortless, bring out the beauty in a screaming child, and keep the back seat of their cars as spotless as their kitchens. And then there's women like Liz Astrof. Who originally had children because "everyone else was." In this blunt and side-splittingly funny book of essays, Liz Astrof embraces the realities of motherhood (and womanhood) that no one ever talks about: like needing to hide from your kids in your closet, your car, or a yoga class on the other side of town, letting them eat candy for dinner because you just can't deal, to the sheer terror of failing them or at the very least losing them in a mall. And sometimes, many times, wondering if the whole parenting thing wasn't for you. In vivid and relatable prose, she discusses her love for her career, how she's managed to overcome some of her own dysfunctional childhood, and the ups and downs of raising the little demons she calls her own...from the office. Soul-baring, entertaining, and insightful, Don't Wait Up is an abashedly honest look at parenting and relationships for moms who realize that motherhood doesn't have to be your entire life--just an amazing part of it--that you would definitely most likely do all over again.