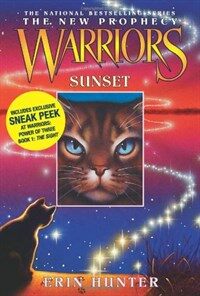 The sixth book in this second series, Warriors: The New Prophecy #6: Sunset, brings more adventure, intrigue, and thrilling battles to the epic world of the warrior Clans.

As shadows of the past continue to plague the forest, Brambleclaw is haunted by a dark figure on a dangerous quest for revenge, and must struggle to remain true to his Clan. A sinister path is unfolding and the time is coming for certain warriors to make the choices that will determine their destinies&; and the destiny of all the Clans.

Provides the final addition to this feline-filled adventure series as the destiny of the Clans is decided upon the revelation of dark secrets and a series of challenging battles. Reprint. 150,000 first printing.

Amidst ongoing strife within and between the Clans of warrior cats, Brambleclaw is tempted by the dark plans of his father and brother, and the meaning of Leafpool's ominous visions becomes clear.