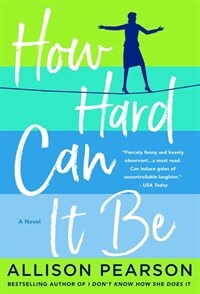 How Hard Can It Be? (Paperback)

Hilarious and poignant, How Hard Can It Be? is for women of all ages who have ever found themselves struggling to do it all, without breaking a sweat or missing a step. It's about starting over, growing older, falling down, and picking yourself back up again. And as a true heroine for our times, Kate Reddy proves it's never too late to rewrite your story.

Kate Reddy had it all: a nice home, two adorable kids, a good husband. Then her kids became teenagers (read: monsters). Richard, her husband, quit his job, taking up bicycling and therapeutic counseling: drinking green potions, dressing head to toe in Lycra, and spending his time - and their money - on his own therapy. Since Richard no longer sees a regular income as part of the path to enlightenment, it's left to Kate to go back to work.

Companies aren't necessarily keen on hiring 49-year-old mothers, so Kate does what she must: knocks a few years off her age, hires a trainer, and prepares a new resume that has a shot at a literary prize for experimental fiction.

When Kate manages to secure a job at the very hedge fund she helped create, she finds herself in an impossible juggling act: proving herself (again) at work, dealing with teen drama, and trying to look after increasingly frail parents as the clock keeps ticking toward her 50th birthday. Then, an old flame shows up out of the blue, and Kate finds herself facing off with everyone from Russian mobsters to a literal stallion.

Surely it will all work out in the end. After all, how hard can it be?