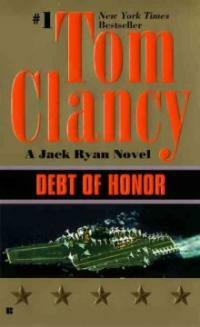 Called out of retirement to serve as National Security Advisor to the president, Jack Ryan, with the help of CIA officers John Clark and Domingo Chavez, must prepare the untested president to meet the challenges of a new world order. Reissue.

“A harrowing tale…Clancy keeps you riveted with political intrigue and military maneuvering [and] sends you rushing headlong to the book’s stunning conclusion.”—USA Today

Bestselling author Tom Clancy takes a bold, incisive look at what our nation’s leaders are calling “the new world order.” The time and place: a world at peace, where yesterday’s enemies are tomorrow’s allies. The players: Jack Ryan as the new U.S. President’s National Security Advisor, and his CIA colleagues, John Clark and Domingo Chavez. The crisis: a shocking chain of events in which the wages of peace are as fully complex—and devastating—as those of war.

“[Debt of Honor] traces the financial, political, military, and personal machinations that drive America into the next major global war…A SHOCKER.”—Entertainment Weekly

Called out of retirement to serve as National Security Advisor to the president, Jack Ryan, with the help of CIA officers John Clark and Domingo Chavez, must prepare the untested president to meet the challenges of a new world order.

Razio Yamata is one of Japan's most influential industrialists, and part of a relatively small group of authority who wield tremendous authority in the Pacific Rim's economic powerhouse.

He has devised a plan to cripple the American greatness, humble the US military, and elevate Japan to a position of dominance on the world stage.

Yamata's motivation lies in his desire to pay off a Debt of Honor to his parents and to the country he feels is responsible for their deaths—America. All he needs is a catalyst to set his plan in motion.

When the faulty gas tank on one Tennessee family's car leads to their fiery death, an opportunistic U. S. congressman uses the occasion to rush a new trade law through the system. The law is designed to squeeze Japan economically. Instead, it provides Yamata with the leverage he needs to put his plan into action.

As Yamata's plan begins to unfold, it becomes clear to the world that someone is launching a fully-integrated operation against the United States. There's only one man to find out who the culprit is—Jack Ryan, the new President's National Security Advisor.