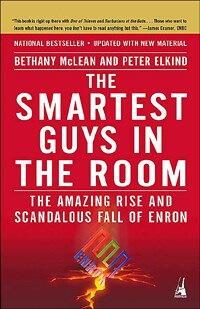 The Smartest Guys in the Room: The Amazing Rise and Scandalous Fall of Enron (Paperback)

Just as Watergate was the defining political story of its time, so Enron is the biggest business story of our time. And just as All the PresidentA's Men was the one Watergate book that gave readers the full story, with all the drama and nuance, The Smartest Guys in the Room is the one book you have to read to understand this amazing business saga. And the critics agree:
A“This book is right up there with Den of Thieves and Barbarians at the Gate. . . . Those who want to learn what happened here, you donA't have to read anything but this.A” A?James Cramer, CNBC

A“The best book about the Enron debacle to date. . . . Based on hundreds of interviews and fresh details, McLean and Elkind masterfully weave together the many strands of the Enron story. They shine in their characterizations of EnronA's often incompetent executives.A” A?Wendy Zellner, BusinessWeek

A“News junkies and mystery lovers who enjoy financial scandals will devour this multilayered book. . . . The Smartest Guys in the Room will rival other models of the genre, including James StewartA's Den of Thieves. . . . The authors write with power and finesse. Their prose is effortless, like a sprinter floating down the track. . . . The character sketches of former chairman Kenneth Lay, former CEO Jeff Skilling and ex-chief financial officer Andrew Fastow are masterful.A” A? Edward Iwata, USA Today

A“Powerful and shocking. . . . succeed[s] in opening a disturbing window into both the company and the era . . . filled with fascinating characters and anecdotes.A” A?Jonathan A. Knee, The New York Times Book Review

A“Meticulously reported and compelling . . . a cautionary tale about highfliers who werenA't as clever as they thought.A” A?David Koeppel, Entertainment Weekly