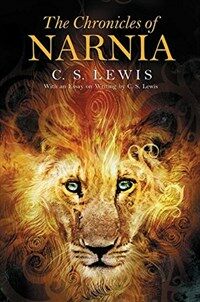 The Chronicles of Narnia: 7 Books in 1 Hardcover (Hardcover)

Aslan, the noble lion, and the royal leaders of Narnia struggle against the magical forces of evil. Beautifully repackaged and featuring the original black-and-white interior illustrations, a collection of the seven classic stories, centering around the magical world of Narnia, will delight a new generation of readers.

Don't miss one of America's top 100 most-loved novels, selected by PBS's The Great American Read. An impressive hardcover volume containing all seven books in the classic fantasy series The Chronicles of Narnia, graced by black-and-white chapter opening illustrations and featuring an essay by C. S. Lewis on writing. This volume also contains C. S. Lewis's essay "On Three Ways of Writing for Children." Fantastic creatures, heroic deeds, epic battles in the war between good and evil, and unforgettable adventures come together in this world where magic meets reality, which has been enchanting readers of all ages for over sixty years. The Chronicles of Narnia has transcended the fantasy genre to become a part of the canon of classic literature. This edition presents all seven books-The Magician's Nephew; The Lion, the Witch and the Wardrobe; The Horse and His Boy; Prince Caspian; The Voyage of the Dawn Treader; The Silver Chair; and The Last Battle-unabridged. The books appear according to C. S. Lewis's preferred order and each chapter features a chapter opening illustration by the original artist, Pauline Baynes.

The Chronicles of NARNIA 나니아연대기 12 Series