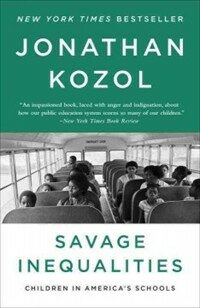 NEW YORK TIMES&#160;BESTSELLER &; &;An impassioned book, laced with anger and indignation, about how our public education system scorns so many of our children.&;&;The New York Times Book Review
&#160;
In 1988, Jonathan Kozol set off to spend time with children in the American public education system. For two years, he visited schools in neighborhoods across the country, from Illinois to Washington, D.C., and from New York to San Antonio. He spoke with teachers, principals, superintendents, and, most important, children. What he found was devastating. Not only were schools for rich and poor blatantly unequal, the gulf between the two extremes was widening&;and it has widened since. The urban schools he visited were overcrowded and understaffed, and lacked the basic elements of learning&;including books and, all too often, classrooms for the students.
&#160;
In&#160;Savage Inequalities, Kozol delivers a searing examination of the extremes of wealth and poverty and calls into question the reality of equal opportunity in our nation&;s schools.
&#160;
Praise for&#160;Savage Inequalities
&#160;
&;I was unprepared for the horror and shame I felt. . . .&#160;Savage Inequalities&#160;is a savage indictment. . . . Everyone should read this important book.&;&;Robert Wilson,&#160;USA Today
&#160;
&;Kozol has written a book that must be read by anyone interested in education.&;&;Elizabeth Duff,&#160;Philadelphia Inquirer
&#160;
&;The forces of equity have now been joined by a powerful voice. . . . Kozol has written a searing expos&#233; of the extremes of wealth and poverty in America&;s school system and the blighting effect on poor children, especially those in cities.&;&;Emily Mitchell,&#160;Time
&#160;
&;Easily the most passionate, and certain to be the most passionately debated, book about American education in several years . . . A classic American muckraker with an eloquent prose style, Kozol offers . . . an old-fashioned brand of moral outrage that will affect every reader whose heart has not yet turned to stone.&;&;Entertainment Weekly