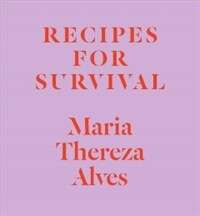 In 1983, when acclaimed Brazilian artist Maria Thereza Alves was an art student at Cooper Union in the United States, she returned to her native country to document the backlands of Brazil, where her family is from. Working with the local people in a collaborative process that has become the hallmark of her mature work, Alves photographed their daily lives and interviewed them to gather the facts that they wanted the world to know about them. Unlike documentation created by outsiders, which tends to objectify Brazil’s indigenous and rural people, Alves’s work presents her subjects as active agents who are critically engaged with history.Recipes for Survival opens with evocative, caption-less black-and-white photographs, most of them portraits that compel viewers to acknowledge the humanity of people without reducing them to types or labels. Following the images are texts in which the villagers matter-of-factly describe the grinding poverty and despair that is their everyday life—incessant labor for paltry wages, relations between men and women that often devolve into abuse, and the hopelessness of being always at the mercy of uncontrollable outside forces, from crop-destroying weather to exploitative employers and government officials. Though not overtly political, the book powerfully reveals how the Brazilian state shapes the lives of its most vulnerable citizens. Giving a voice to those who have been silenced, Recipes for Survival is, in Alves’s words, “about we who are the non-history of Brazil.”