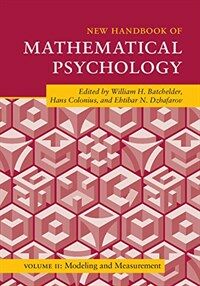 The field of mathematical psychology began in the 1950s and includes both psychological theorizing, in which mathematics plays a key role, and applied mathematics motivated by substantive problems in psychology. Central to its success was the publication of the first Handbook of Mathematical Psychology in the 1960s. The psychological sciences have since expanded to include new areas of research, and significant advances have been made in both traditional psychological domains and in the applications of the computational sciences to psychology. Upholding the rigor of the original Handbook, the New Handbook of Mathematical Psychology reflects the current state of the field by exploring the mathematical and computational foundations of new developments over the last half-century. The second volume focuses on areas of mathematics that are used in constructing models of cognitive phenomena and decision making, and on the role of measurement in psychology.

Shows how foundational mathematical ideas can be employed in the understanding of a variety of psychological phenomena.