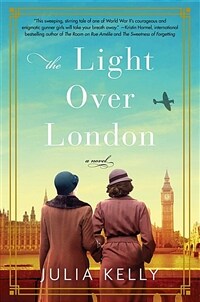 The Light Over London (Hardcover)

Told from the present-day perspective of a British antiques dealer who specializes in helping families sell the contents of estates, the acclaimed author of the Governess series transports us to World War II London through forgotten treasures in this entrancing, heartbreaking novel, reminiscent of Martha Hall Kelly’s Lilac Girls.

For Cara Hargraves, burying herself in the past is easier than confronting the present, which is why working with a gruff but brilliant antiques dealer is the perfect salvation. While clearing out an estate, she pries open an old tin that holds the relics of a lost relationship; among the treasures, a World War II-era diary and a photograph of a young woman in uniform?the same one Cara’s grandmother wore during the war. Eager to find the author of the hauntingly beautiful, unfinished diary, Cara embarks on a journey to untangle the affair, and just maybe uncover her grandmother’s deeply guarded secrets, too.

In 1941, nineteen-year-old Louise Keene’s life had been decided for her?she’ll wait at home in her Cornish village until the wealthy son of her mother’s best friend returns from war to ask for her hand. But when Louise unexpectedly meets Flight Lieutenant Paul Bolton, a dashing RAF pilot stationed at a local base, everything changes. But their whirlwind romance is cut short when Paul’s unit is deployed.

Desperate for a larger life, Louise defies her parents and joins the women’s branch of the British Army in the anti-aircraft gun unit. As bombs fall on London, she relishes in her growing friendships with the gunner girls and knowing she and Paul will be together when the war is over. But when a bundle of her letters to Paul are returned unanswered, she learns that wartime romance can have a much darker side.

Perfect for fans of The Nightingale by Kristin Hannah, these remarkable women reveal the power within, no matter the generation, as they search for love, freedom, and the truth.