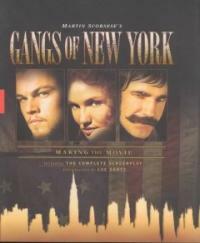 Set in the turbulent streets of Lower Manhattan in the mid-nineteenth century, Martin Scorsese's Gangs of New York depicts the politically corrupt and volatile social climate of New York during the early years of the Civil War. While the North is fighting in the South, the difference between the insular opulence of uptown life and the lawless destitution of those living downtown becomes more intolerable. Irish immigrants and emancipated slaves add to the swelling numbers of the poor. The city is a bomb ready to explode.

The action unfolds at the Five Points, a notoriously corrupt, gang-infested area between New York harbor and lower Broadway, where the native-born (Protestant) Americans and the Irish (Catholic) immigrants battle for control of the city. Amsterdam Vallon (played by Leonardo DiCaprio) is a young Irish-American who has returned to New York, after fifteen years in a house of reform, to seek revenge against Bill the Butcher (Daniel Day-Lewis), the nativist gang leader who had killed Vallon's father. The movie follows Amsterdam as he infiltrates Bill's inner circle, falls in love with Jenny Everdeane (Cameron Diaz), a beguiling pickpocket, and fights for the honor of his family and people. His personal struggle explodes in tandem with the 1863 draft riots, the most dramatic episode of urban unrest in American history.

Included in the book are interviews of the principal people involved with the making of the film: the director, actors, cinematographer, designers, screenwriters, and producers; the complete shooting script; a historical introduction by the writer Luc Sante, the film's technical advisor; color stills taken during the shooting; sketches of the lavish sets and costumes, and a portfolio of behind-the-scenes photographs taken by Brigitte Lacombe. This is an inside look at how an epic movie, one which the director had envisioned for twenty-five years, got made.