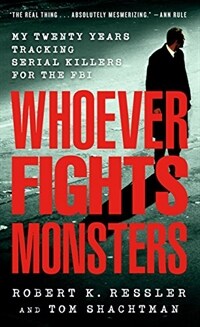 Face-to-face with some of America's most terrifying killers, FBI veteran and ex-Army CID colonel Robert Ressler learned form then how to identify the unknown monsters who walk among us--and put them behind bars. Now the man who coined the phrase "serial killer" and advised Thomas Harris on The Silence of the Lambs shows how is able to track down some of today's most brutal murderers.

Just as it happened in The Silence of the Lambs, Ressler used the evidence at a crime scene to put together a psychological profile of the killers. From the victims they choose, to the way they kill, to the often grotesque souvenirs they take with them--Ressler unlocks the identities of these vicious killers of the police to capture.

And with his discovery that serial killers share certain violent behaviors, Ressler's gone behind prison walls to hear the bizarre first-hand stories countless convicted murderers. Getting inside the mind of a killer to understand how and why he kills, is one of the FBI's most effective ways of helping police bring in killers who are still at large.

Join Ressler as he takes you on the hunt for toady's most dangerous psychopaths. It is a terrifying journey you will not forget.