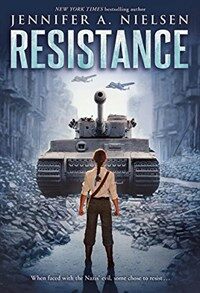 Chaya Lindner is a teenager living in Nazi-occupied Poland. Simply being Jewish places her in danger of being killed or sent to the camps. After her little sister is taken away, her younger brother disappears, and her parents all but give up hope, Chaya is determined to make a difference. Using forged papers and her fair features, Chaya becomes a courier and travels between the Jewish ghettos of Poland, smuggling food, papers, and even people.

Soon Chaya joins a resistance cell that runs raids on the Nazis' supplies. But after a mission goes terribly wrong, Chaya's network shatters. She is alone and unsure of where to go, until Esther, a member of her cell, finds her and delivers a message that chills Chaya to her core, and sends her on a journey toward an even larger uprising in the works -- in the Warsaw Ghetto.

Though the Jewish resistance never had much of a chance against the Nazis, they were determined to save as many lives as possible, and to live -- or die -- with honor.

The New York Times best-selling author of the Ascendance and Mark of the Thief trilogies tells an extraordinary story of a Jewish girl's courageous efforts to resist the Nazis.

In 1942 sixteen-year-old Chaya Lindner is a Jewish girl living in Nazi-occupied Poland, a courier who smuggles food and documents to the isolated Jewish ghettos in southern Poland, depending on her forged papers and "Aryan" features--but when a mission goes wrong and many of her colleagues are arrested she finds herself on a journey to Warsaw, where an uprising is in the works.

After a smuggling mission to an isolated Jewish ghetto goes wrong and her colleagues are arrested, Chaya Lindner, a Jewish girl living in Nazi-occupied Poland, decides to go to Warsaw, where an uprising is in the works.