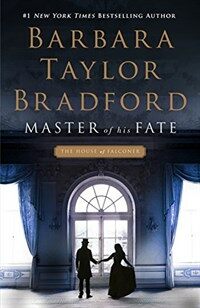 Master of His Fate: A House of Falconer Novel (Hardcover)

Victorian England is a country of sharp divides between rich and poor, but James Lionel Falconer is everything a self-made man should be: handsome, ambitious, charming, and brimming with self-confidence. Even as a boy working in his father’s market stall in Camden, he was determined to become a merchant prince. Through hard work and a single-minded determination, James rises quickly through the ranks, with a loving wife, devoted children, and a lofty position in the Malvern & Malvern Company. But when back-to-back tragedies strike the Falconer home, shattering this idyllic life, it seems as though James might never recover his former glory…until a royal summons gives him the chance to prove that he truly is a master of the game.

The first book in an expansive and intricately detailed new historical fiction series from master storyteller Barbara Taylor Bradford, Master of the Game is filled with drama, intrigue, and Bradford's trademark cast of compelling characters.