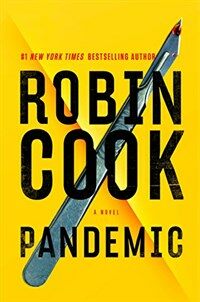 "The explosive new medical thriller from New York Times-bestselling author Robin Cook. After a young, seemingly healthy woman collapses suddenly on the NYC subway and dies by the time she reaches the hospital, her case is initially chalked up to a virulent strain of influenza. That is, until she ends up on Dr. Jack Stapleton's autopsy table, where Jack discovers something eerily fishy: First, that the young woman has had a heart transplant, and second, that her DNA matches that of the transplanted heart. Strangely, two more incidences of young people with this same sudden and rapid illness follow, and Jack fears that this could be the start of an unprecedented pandemic. But the facts aren't adding up. Something is off about these cases, something creepy, and only Jack can figure it out before it's too late. Thus begins a race against time, during which Jack unveils the dark underbelly of the organ-transplant market. His name is Bui Zhao, a businessman and hospital board member who has been cheating the system by using organs and cells from chimeric pigs, via the gene-editing biotechnology CRISPER/CAS9, which allows pig genes to be inserted into living human cells. In a climactic mortal showdown, Jack must face Zhao, the megalomaniac willing to risk the fate of the world to purse his commercial interests, if he wants to save the future of medicine"--

When a heart-transplant recipient abruptly dies under suspicious circumstances, Dr. Jack Stapleton follows leads to a gene-editing biotechnology and the unethical requirements of a megalomaniacal businessman.

When an unidentified, seemingly healthy young woman collapses suddenly on the New York City subway and dies upon reaching the hospital, her case is an eerie reminder for veteran medical examiner Jack Stapleton of the 1918 flu pandemic. Fearful of a repeat on the one hundredth anniversary of the nightmarish contagion, Jack autopsies the woman within hours of her demise and discovers some striking anomalies: first, that she has had a heart transplant, and second, that, against all odds, her DNA matches that of the transplanted heart.

Although the facts don't add up to influenza, Jack must race against the clock to identify the woman and determine what kind of virus could wreak such havoc--a task made more urgent when two other victims succumb to a similar rapid death. But nothing makes sense until his investigation leads him into the fascinating realm of CRISPR/CAS9, a gene-editing biotechnology that's captured the imagination of the medical community. . . and the attention of its most unethical members. Drawn into the dark underbelly of the organ transplant market, Jack will come face-to-face with a megalomaniacal businessman willing to risk human lives in order to conquer a lucrative new frontier in medicine--and if Jack's not careful, the next life lost might be his own.

When a heart-transplant recipient abruptly dies under suspicious circumstances, veteran medical examiner Jack Stapleton follows leads to a gene-editing biotechnology and the unethical requirements of a megalomaniacal businessman. By the best-selling author of Coma.