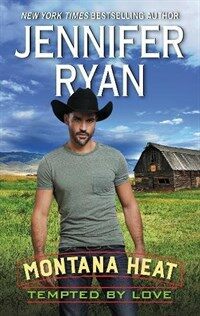 She was this Montana Man’s greatest temptation . . .

Alina Cooke—little sister of his two best friends—is the last woman DEA agent Jay Bennett should be waking up next to on the day of her brother’s wedding. But their powerful attraction ignited a powder keg of desire, and their once simple friendship has just become impossibly complicated.

Alina’s always been steady, focused, and lived on the safe side of life. Jay is totally devoted to his dangerous job. She knows a future with him will be filled with worry that one day he won’t come home. She’s done it with her brothers. She’s not sure she can face that uncertainty with the man she loves. Yet being in his arms is a bad idea they keep repeating, again and again.

When Alina is run off the road, Jay fears his job has made her a target. But the threat in Alina’s life is closer than they think. As the enemy gets more ruthless, Alina proves she’s no easy target and Jay will do anything to bring them down. Because surviving and being together is the only thing that matters.

When Alina Cooke is targeted by a ruthless enemy, DEA agent Jay Bennett will do anything to keep her safe, because being with her is the only thing that matters. By a New York Times best-selling author. Original. 300,000 first printing.