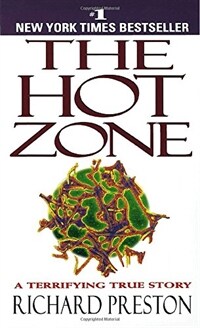 The Hot Zone: The Terrifying True Story of the Origins of the Ebola Virus (Mass Market Paperback)

The bestselling landmark account of the first emergence of the Ebola virus.

A highly infectious, deadly virus from the central African rain forest suddenly appears in the suburbs of Washington, D.C. There is no cure. In a few days 90 percent of its victims are dead. A secret military SWAT team of soldiers and scientists is mobilized to stop the outbreak of this exotic "hot" virus. The Hot Zone tells this dramatic story, giving a hair-raising account of the appearance of rare and lethal viruses and their "crashes" into the human race. Shocking, frightening, and impossible to ignore, The Hot Zone proves that truth really is scarier than fiction.

Describes how a strain of lethal virus showed up in 1989 at a Virginia laboratory, and relates the efforts of a military biohazard SWAT team to identify and contain the virus