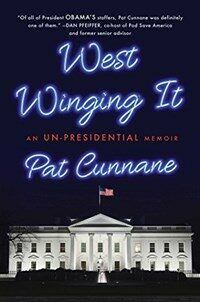 The West Wing meets The Office in this fresh and funny exclusive look into President Barack Obama’s years in the White House, directly from his Senior Writer and former Director of Messaging.West Winging It: An Unpresidential Memoir is the personal story of Pat Cunnane and his journey from outsider to insider, from his dreary job at a warehouse to his dream job at the White House. Pat pulls the drapes back on the most famous and exclusive building in the United States, telling the story of the real West Wing with compelling and quirky portraits of the people who populate the place, from the President to the press corps. Pat takes you into the Oval Office, providing a witty insider’s glimpse of that it’s really like?from the minutiae to the momentous?to work at 1600 Pennsylvania Avenue. Along the way, Pat draws an intimate portrait of the side of President Obama that few were privy to?the funnyman, the nerd, the athlete, the caring parent. He describes both the small details?the time he watched in horror as the President reached over the sneeze guard at Chipotle?and the larger, historic moments, such as watching the President handle the news of the 2015 terrorist attacks in Paris. In some ways, working at the White House is a lot like every office, and in some ways, it’s like no office ever. Pat recounts the time he accidentally slammed a door on Joe Biden, plotted to have the Pope bless him by faking a sneeze, and almost killed America’s First Dog. Pat’s story is one of proximity to history, revealing an office where both the historically momentous and the hilariously mundane occurred every day. He brings the White House to life with hysterical, heartwarming, and sharply observed depictions of the President and Vice President. It’s a fun portrait of a remarkable time and an extraordinary President, featuring a bunch of brilliant, quirky staffers bursting in and out of frame. He recounts the behind-the-scene highs and lows of the West Wing, from the elation of 2012 to the despair of 2016. Filled with sharp observations and exclusive photos, West Winging It is at its core a fish-out-of-water story?only these fish are trying to run the United States of America.