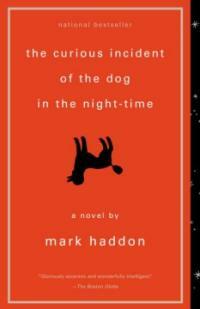 The Curious Incident of the Dog in the Night-Time (Paperback)

After stumbling upon his neighbor's dog, Wellington, impaled on a garden fork and being blamed for the killing, fifteen-year-old Christopher John Francis Boone, an autistic savant obsessed with Sherlock Holmes, decides to track down the real killer and turns to his detective hero to help him with the investigation, which brings him face to face with a family crisis. A first novel. Reader's Guide available. Reprint. 150,000 first printing.

A bestselling modern classic—both poignant and funny—about a boy with autism who sets out to solve the murder of a neighbor's dog and discovers unexpected truths about himself and the world.

Christopher John Francis Boone knows all the countries of the world and their capitals and every prime number up to 7,057. He relates well to animals but has no understanding of human emotions. He cannot stand to be touched. And he detests the color yellow.

This improbable story of Christopher's quest to investigate the suspicious death of a neighborhood dog makes for one of the most captivating, unusual, and widely heralded novels in recent years.

Despite his overwhelming fear of interacting with people, Christopher, a mathematically-gifted, autistic boy, decides to investigate the murder of a neighbor's dog and uncovers secret information about his mother.