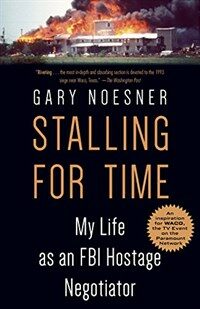 Stalling for Time: My Life as an FBI Hostage Negotiator (Paperback)

The FBI’s chief hostage negotiator recounts harrowing standoffs, including the Waco siege with David Koresh and the Branch Davidians, in a memoir that serves as a basis for the upcoming series Waco.

An enraged man abducts his estranged wife and child, holes up in a secluded mountain cabin, threatening to kill them both. A right wing survivalist amasses a cache of weapons and resists calls to surrender. A drug trafficker barricades himself and his family in a railroad car, and begins shooting. A cult leader in Waco, Texas faces the FBI in an armed stand-off that leaves many dead in a fiery blaze. A sniper, claiming to be God, terrorizes the DC metropolitan area. For most of us, these are events we hear about on the news. For Gary Noesner, head of the FBI’s groundbreaking Crisis Negotiation Unit, it was just another day on the job.

In Stalling for Time, Noesner takes readers on a heart-pounding tour through many of the most famous hostage crises of the past thirty years. Specially trained in non-violent confrontation and communication techniques, Noesner’s unit successfully defused many potentially volatile standoffs, but perhaps their most hard-won victory was earning the recognition and respect of their law enforcement peers.

Noesner pursued his dream of joining the FBI all the way to Quantico, where he not only became a Special Agent, but also?in the course of a distinguished thirty-year career?the FBI’s Chief Negotiator. Gaining respect for the fledgling art of crisis negotiation in the hard-boiled culture of The Bureau, where the shadow of J. Edgar Hoover still loomed large, was an uphill battle, educating FBI and law enforcement leaders on the job at an incident, and advocating the use of? psychology rather than force whenever possible. Noesner’s many bloodless victories rarely garnered as much media attention as the notorious incident management blunders like the Branch Davidian disaster in Waco and the Ruby Ridge tragedy.?

Noesner offers a candid as well as fascinating look back at his years as a rebel in the ranks and a pioneer on the front lines. Whether vividly recounting showdowns with the radical Republic of Texas militia, the terrorist hijackers of the cruise ship Achille Lauro, and self-styled messiah David Koresh, or clashes with colleagues and superiors that expose the internal politics and power-plays of America’s premier law enforcement agency, Stalling for Time crackles with breathtaking suspense and insight in equal measure. Case by case, minute by minute, it’s a behind the scenes view of a visionary crime-fighter in action.