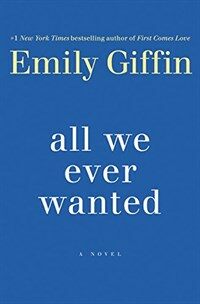 All We Ever Wanted (Hardcover)

NEW YORK TIMES BESTSELLER • In this riveting novel from the #1 bestselling author of Something Borrowed and First Comes Love, three very different people must choose between their families and their most deeply held values. . . .

“An unpredictable page-turner that unfolds in the voices of three superbly distinct characters.”—The Atlanta Journal-Constitution • “A gripping, thought-provoking journey.”—Jodi Picoult

NAMED ONE OF THE BEST BOOKS OF THE YEAR BY THESKIMM

Nina Browning is living the good life after marrying into Nashville’s elite. More recently, her husband made a fortune selling his tech business, and their adored son has been accepted to Princeton.

Yet sometimes the middle-class small-town girl in Nina wonders if she’s strayed from the person she once was.

Tom Volpe is a single dad working multiple jobs while struggling to raise his headstrong daughter, Lyla. His road has been lonely, long, and hard, but he finally starts to relax after Lyla earns a scholarship to Windsor Academy, Nashville’s most prestigious private school.

Amid so much wealth and privilege, Lyla doesn’t always fit in—and her overprotective father doesn’t help—but in most ways, she’s a typical teenaged girl, happy and thriving.

Then, one photograph, snapped in a drunken moment at a party, changes everything. As the image spreads like wildfire, the Windsor community is instantly polarized, buzzing with controversy and assigning blame.

At the heart of the lies and scandal, Tom, Nina, and Lyla are forced together—all questioning their closest relationships, asking themselves who they really are, and searching for the courage to live a life of true meaning.

Praise for All We Ever Wanted

“If you’re looking for a book club selection, All We Ever Wanted is bound to spark meaningful and meaty discussions.”—The Augusta Chronicle

“A page-turning exploration of wealth and privilege.”—Entertainment Weekly

When her golden-boy son posts a controversial photograph of a scholarship student online, triggering a local scandal, a wife and mother finds herself sympathizing more with the girl's family than her own. By the best-selling author of First Comes Love.

"In the new novel from the #1 New York Times bestselling author of First Comes Love and Something Borrowed, a woman is forced to choose between her family and her most deeply held values. Nina Browning is living the good life after marrying into Nashville's elite. Her husband's tech business is booming, and her adored son, Finch, is bound for Princeton. Tom Volpe is a single dad working multiple jobs. His adored daughter, Lyla, attends Nashville's most prestigious private school on a scholarship. But amid the wealth and privilege, Lyla doesn't always fit in. Then one devastating photo changes everything. Finch snaps a picture of Lyla passed out at a party, adds a provocative caption, and sends it to a few friends. The photo spreads like wildfire, and before long, an already divided community is buzzing with scandal and assigning blame. In the middle of it all, Nina finds herself relating more to Tom's reaction than her own husband's--and facing an impossible choice"--

After the daughter of a single father becomes a victim due to a social media photograph taken by her son, Nina Browning, a member of Nashville's elite, must make a difficult choice when she finds herself relating more to the single father than to her husband and her wealthy community.