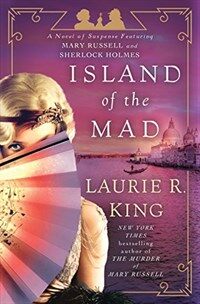 Island of the Mad: A Novel of Suspense Featuring Mary Russell and Sherlock Holmes (Hardcover)

Mary Russell and Sherlock Holmes are back in the New York Times bestselling series that Lee Child called "the most sustained feat of imagination in mystery fiction today."Following the startling revelations of Mrs. Hudson's past and a commission of murder in the spring of 1925, Mary Russell receives word that a friend's beloved aunt, long committed to Bedlam mental hospital, has escaped. Russell is feeling less than balanced herself at the moment, and the last thing she wants is to deal with the mad--but she agrees to look into it. The pursuit takes her from rural England across Europe to Venice, where masks are everywhere, serenity is in short supply, and the truth is as slippery as the pavements.