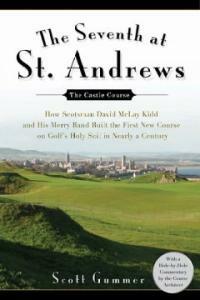 The Seventh at St. Andrews (Hardcover)

An acclaimed Scottish golf course architect who had to go to America to make his name lands the most coveted commission in all of golf: to design the first new course in almost a century for the town of St. Andrews, the gameA's ancestral home.

David McLay Kidd became a wunderkind golf course architect before he was thirty years old, thanks to his universally lauded design at Bandon Dunes on the Oregon coast. When the town of St. Andrews announced in 2001 that a new championship course was in the worksA?the townA's first since 1914A?Kidd fought off all comers and earned the right to make golf history. Author Scott Gummer was there to chronicle the days in the dirt and the nights in the pubs, the politics and histrionics, all with exclusive access to David Kidd, his team, and the St. Andrews Links Trust.

Unfolding in arresting you-are-there scenes, The Seventh at St. Andrews follows the young master at work as Kidd, with his sharp tongue, leads his accomplices in transforming a plot of flat, uninspiring farmlandA?smack in the middle of which sits the townA's sewage plantA?into a rollicking golfing adventure and the most anticipated golf course opening in a generation.

MurphyA's Law seems to govern the process, however, as everything that can go wrong seemingly does: from epic wooly weather, to cattle grazing on the site, to vociferous opposition among the townsfolk, to bureaucrats so stuck in their ways they cannot be budged even with one of KiddA's bulldozers.

The story chronicles the decade-long journey from the first notion of a seventh course to its official opening. Kidd & Co. exceed everyoneA's expectations by building a magnificent throwback course that looks to have been shaped by the wind and rain and nature rather than modern machinery. The Seventh at St. Andrews brings the underappreciated art of golf course design to life, and along the way profiles an unforgettable cast of characters that includes KiddA's jovial father, a golf legend in his own right; KiddA's taciturn right-hand man; and the roustabout Scottish shaper, the Da Vinci in a A'dozer who is the heart of KiddA's crew.