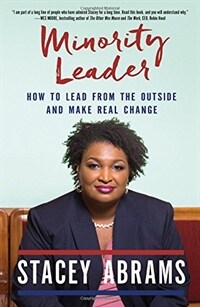 Minority Leader: How to Build Your Future and Make Real Change (Hardcover)

A “Lean In for the rest of us,” MINORITY LEADER is a guide to harnessing the strengths of being an outsider to go further, fight harder, and find the will to succeed?from Stacey Abrams, who is slated to become the first black female governor in the history of the United States.Networking, persistence, and hard work. We all know these are the crucial ingredients to advancing a career, but for people like Stacey Abrams, and so many in the New American Majority, it takes more than that to get ahead. Stacey, who grew up as one of six children in a working-poor family in Gulfport, Mississippi, rose from humble roots to Yale Law School, and through a career in C-suite businesses, to become the first woman to lead either party in the Georgia General Assembly and the first African American to lead in the House of Representatives. In MINORITY LEADER, Stacey combines aspects of memoir with real-world advice for women and people of color, to dissect the obstacles between minorities and their dreams, offering hard-won insights for navigating worlds that, until now, were largely the territory of white men alone.Stacey isn’t afraid to get real with her readers and encourages them to both leverage otherness to their advantage and to recognize their own underlying feelings of unworthiness and legitimate fears. Sure, networking helps, but so do well-chosen mentors, humility over self-effacement, thoughtful self-advocacy, and, above all, pinpointing one’s genuine passions. Stacey applies her lessons to the recent graduate taking her big idea to the startup level, the Latino city councilman eyeing the mayor’s office, and the young assistant navigating her way to a higher position. Stacey’s audience has likely found insight in Ta Nehisi-Coates’ Between the World and Me or Rebecca Traister’s All the Single Ladies and yet seeks practical guidance from someone whose story resembles their own. There is precious little such wisdom out there. Stacey is determined to change that.