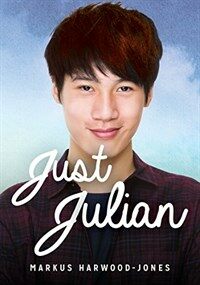 Nineteen-year-old Julian doesn't see any point to life. After years of bullying at school, he is so depressed that his single mother must stay home from work to care for him, and the only outlet for his feelings is his artwork. He sees a glimmer of hope after meeting the similarly out-of-place Romeo at a party and sharing a kiss with him. But Romeo has always identified as straight -- and he hangs out with a group of guys who hurt Julian's friend Paris and harassed his cousin Ty.

But Julian can't deny his attraction to Romeo, who is confused about his feelings and embarrassed by his past behaviour. As the two begin to fall in love, Julian finds strength he never knew he had, coming out from hiding behind his paintings and brokering peace between Romeo and Ty. But Romeo's old friends come after the couple, resulting in a vicious fight that puts both Julian and Romeo in the hospital. With the encouragement of Mrs. Duke, Paris's mother and Romeo's vice-principal, the two boys decide to take a stand for their right for respect.

Just Julian provides insight into the struggle against homophobia, reminding LGBTQ readers that they are not alone.