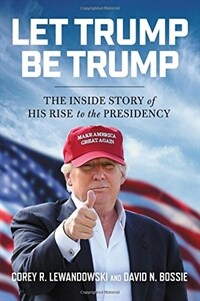 Let Trump Be Trump: The Inside Story of His Rise to the Presidency (Hardcover)

LET TRUMP BE TRUMP: THE INSIDE STORY OF HIS PRESIDENCY is the ultimate behind-the-scenes account of how he became President of the United States.
Corey R. Lewandowski, Trump's campaign manager who contributed to Trump's historic bid for the White House, teams up with David N. Bossie, the consummate political pro who helped steer the last critical months of the Trump Campaign, to offer the first insiders' account of the most historic campaign in modern political history. Starting from the months leading up to Trump's announcement all the way through staff shakeups within the White House, LET TRUMP BE TRUMP offers eyewitness accounts of the real stories behind some of the most sensational headlines.
At turns surprising, raw with emotion, and hilarious, LET TRUMP BE TRUMP is a book destined to be beloved by Trump supporters and cited by even Trump critics as the first and most definitive insider account of the 2016 campaign.