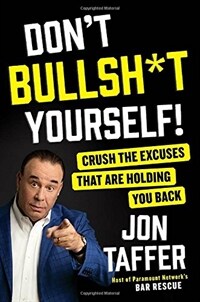 Don't Bullsh*t Yourself!: Crush the Excuses That Are Holding You Back (Hardcover)

Jon Taffer, the popular host of Spike TV's Bar Rescue, doesn't sugarcoat--he tells it like it is. In Don't Bullsh*t Yourself, he teaches you how to stop fooling yourself and turn your excuses into solutions, to improve your life and business.

As host of SpikeTV's hugely popular Bar Rescue, Jon Taffer gives struggling bars one last chance to succeed with a mixture of business acumen and tough love. Now, he offers his no-nonsense strategy for kicking excuses to the curb, with a dose of raw and refreshing honesty. He'll help you identify your excuses and take practical steps to fix them.

We all love to make excuses; it's only human. It's so much easier to pin the blame on everyone and everything else than to admit our own shortcomings. But when we make excuses, we are lying to ourselves. Jon Taffer is here to shut it down. He argues that if we can identify the real issue behind the excuse and address it in a straightforward way, we have the power to turn our lives around completely.

Doing what you've always done will get you nowhere. Taffer breaks excuses down into six major categories, offering real life examples that are sure to instruct and inspire, such as:

??*??Marcus Luttrell, the lone survivor of a SEAL team mission in Afghanistan, who faced his fears one step at a time to avoid almost certain death in Taliban territory.

??*??Indra Nooyi, Pepsi CEO, whose commitment to continuous learning and willingness to implement customer feedback has allowed her to keep her company competitive in a tough marketplace.

??*??Mark Itkin, longtime television agent at William Morris Endeavor, who worked his way up from the mailroom, going against the grain to transform the television industry with the creation of Real World and other reality TV megahits.

??*??Derrick Coleman, the deaf former Seattle Seahawks fullback, who, despite always being picked last in school, was able to overcome his circumstance to turn his deafness into an asset on and off the field.

You are your own worst enemy--if you own your failure, you can fight it. Jon Taffer in Don't Bullsh*t Yourself! gives you a chance to throw away your excuse crutches so you can get back to winning.