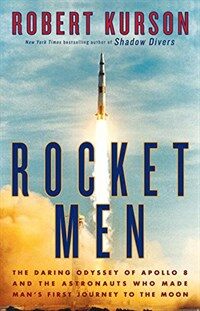 Rocket Men: The Daring Odyssey of Apollo 8 and the Astronauts Who Made Man's First Journey to the Moon (Hardcover)

The inside, lesser-known story of NASA's boldest and riskiest mission: Apollo 8, mankind's first journey to the Moon on Christmas in 1968. A riveting account of three heroic astronauts who took one of the most dangerous space flights ever, from the New York Times bestselling author of Shadow Divers.

In early 1968, the Apollo program was on shaky footing. President Kennedy's end-of-decade deadline to put a man on the Moon was in jeopardy, and the Soviets were threatening to pull ahead in the space race. By August 1968, with its back against the wall, NASA decided to scrap its usual methodical approach and shoot for the heavens. With just four months to prepare--a fraction of the normal time--the agency would send the first men in history to the Moon. In a year of historic violence and discord--the Tet offensive, the assassinations of MLK and RFK, the Chicago DNC riots--the Apollo 8 mission was the boldest test of what America could do. With a focus on astronauts Frank Borman, Jim Lovell, and Bill Anders, and their wives and children, this is a vivid, gripping, you-are-there narrative that shows anew the epic danger involved, and the singular bravery it took, for man to leave Earth for the first time--and to arrive at a new world.