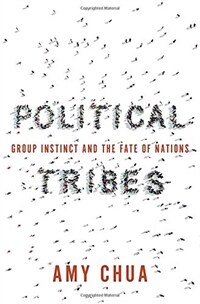 Political Tribes: Group Instinct and the Fate of Nations (Hardcover)

From the bestselling author of Battle Hymn of the Tiger Mother and Yale Law School Professor Amy Chua, a bold new look at how longstanding false assumptions about group behavior have been the undoing of America's best laid plans, particularly in our foreign policy

We all want--no, are compelled--to be part of the group. Sports teams, churches, companies, nations, races--some groups we belong to voluntarily, others we find ourselves enrolled in at birth. These groups shape our identities. Indeed, in some parts of the world, people kill and die for their group. But where Americans see divisions of ideas--capitalism vs. communism, democracy vs. authoritarianism, the "Free World" vs. the "Axis of Evil"--others see older and deeper group identities, not national or ideological but ethnic, religious, sectarian, and tribal. Time and time again this tendency has undermined American foreign policy. In the Vietnam War, an inability to apprehend the importance of Vietnamese nationalism, and an insistence on seeing the conflict through the lens of the Cold War, brought America to its knees. Several decades later, American leadership badly misapprehended the significance of Pashtun identity and loyalty in Afghanistan. In Iraq, we failed to take stock of the potential for violence between Sunnis and Shias. It's time to cure ourselves of this myopic one-size-fits-all view of group behavior in our foreign policy.

But just as America has been willfully blind to the significance of group behavior abroad, we have remained intractably in thrall to it at home. Political leaders and commentators alike refer to the "black vote," the "Evangelical vote," the "non-college-educated white male vote," "the suburban white female vote," and so on. Despite our constitutional commitments to individual liberty and equality, we have always been intensely group conscious as a nation, from our original sin of slavery to Dred Scott to the Chinese Exclusion Act to Jim Crow. Given how political mobilization is characteristically organized around group-based movements that increasingly reject universalist rhetoric, should we be so surprised by the disturbing recent rise in anti-immigrant, anti-Muslim, and racist rhetoric?

In characteristically persuasive style, Amy Chua explodes this most American of paradoxes: how can we be so group blind abroad and yet so acutely group conscious at home? She argues forcefully that we need to be far more knowledgeable and strategic about ethnic, religious, and tribal identity in our foreign policy, and far more unified at home. Enough false slogans of unity, which are just another form of divisiveness. It is time for a more difficult unity that acknowledges the reality of group differences and fights the deep inequities that divide us.