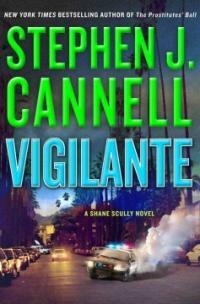 In the last novel by acclaimed producer and New York Times bestselling author Stephen J. Cannell, LAPD detective Shane Scully and his partner Sumner Hitchens investigate a crime with ties to the sometimes violent world of reality TVLita Mendez was a thorn in the LAPD's side.  An aggressive police critic and gang activist, she’d filed countless complaints against the department. So when she's found dead in her home, Detective Scully and his partner Hitchens fear the worst: that there's a killer in their ranks.Outside the crime scene, Nixon Nash and his television crew have set up shop.  Nash is the charismatic host of a hit reality show called "Vigilante TV," dedicated to beating the cops at their own game: solving murders before they can.  Now he has the murder of Lita Mendez in his sights.  He presents the detectives with a choice: either join his team, or prepare for a public takedown.But Scully knows that Nash isn't the folk-hero he seems.  He will do anything in the name of self-promotion.  If a detective got in his way, would he be prepared to kill? In this new novel, Scully will have to risk everything save himself and the job he loves.