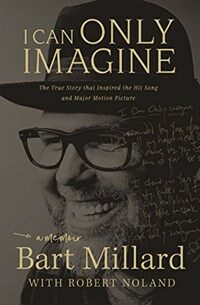 I Can Only Imagine: A Memoir (Paperback)

&;The Story That Inspired the Major Motion Picture.&;

The captivating story behind the bestselling single in the history of Christian music&;and the man who wrote it

MercyMe&;s crossover hit, &;I Can Only Imagine,&; has touched millions of people around the world. But few know about the pain, redemption, and healing that inspired it. Now Bart Millard, award-winning recording artist and lead singer of MercyMe, shares how his dad&;s transformation from abusive father to man of God sparked a divine moment in music history.&#160;

Go behind the scenes of Bart&;s life&;and the movie based on it&;to discover how God repaired a broken family, prepared Bart for ministry through music, and wrote the words on his heart that would change his life forever.&#160;I Can Only Imagine&#160;is a front-row seat to witnessing God&;s presence throughout Bart&;s life. Whether falling in love with his childhood sweetheart or mourning his father&;s death, founding MercyMe or flailing in the midst of its success, Bart continues to place his trust in God&;s plans&;plans that continue to surprise and surpass what Bart could have ever imagined.&#160;&#160;

The lead singer of a popular, contemporary Christian band, MercyMe, shares how growing up with an abusive father and having his dreams of being a professional athlete destroyed by a sports injury led him to music and healing through faith, in a book that inspired the motion picture set to released in March 2018. Original. Movie tie-in.