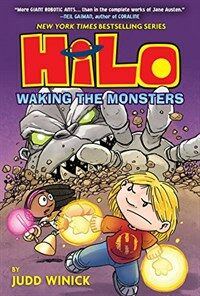 DJ and Gina are TOTALLY ordinary kids. But Hilo isn't! ALERT! ALERT! ALERT! Has our favorite space boy finally met his match? Not if D.J. and Gina can help it! Mega Robot Monsters are suddenly waking up all over and they're TOO BIG and TOO STRONG for Hilo to fight on his own! Luckily, he doesn't have to! He has GINA and some brand new SUPER POWERS on his side! Being heroes can be super fun-but it can also be SUPER dangerous! And the closer Hilo and Gina get to saving their world from the monsters--the closer Hilo gets to the dark secret of his past. Does he really want to know? Do WE?!

Here's what people (and robots!) are saying about Hilo!

"Every kid would love a pal like HILO, and&#160;every kid will love this book!"&#160;--Lincoln Peirce, bestselling author of the Big Nate series

"A perfect book for any kid who ever needed a friend and then had one with superpowers fall from space." --Seth Meyers, actor, comedian and writer

"A story that can be enjoyed by the entire family."--The New York Times

When Mega Robot Monsters begin suddenly turning up all over the place, Hilo teams up with Gina in the hopes that she and some of his brand-new superpowers will save the day, a situation that is complicated by dark revelations about his past. Simultaneous eBook.

Hilo and his friends learn more about Hilo's past while they battle robots that were buried underground on Earth a thousand years ago.

Hilo and his friends learn more about Hilo's past while they battle robots that were buried underground on Earth a thousand years ago.