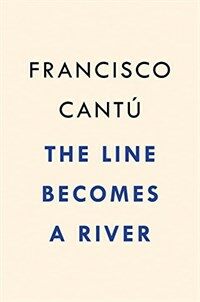 The Line Becomes a River: Dispatches from the Border (Hardcover)

A former US Border Patrol agent's haunting exploration of his time on the Mexican border and the politics, gatekeepers, and victims on both sides of the line.For Francisco Cantu, the border is in the blood. His mother, a second-generation Mexican American whose father was a border crosser, raised him in Arizona's desert scrublands and the national parks where she worked as a ranger. Haunted by the landscape of his youth, Cantu joins the Border Patrol. He and his partners are posted to the remote crossroads of a drug route and a smuggling corridor, where they learn to track other humans under the punishing glare of the sun and through dark, frigid nights. When they find them dead, they haul in the bodies. When they find them alive - parched, delirious, desperate - they deliver them to detention. Cantu tries not to think where the stories go from there.Plagued by nightmares, Cantu abandons the Patrol for civilian life. In the cafe where he takse a job, he befriends Jose, who has lived in the US for more than thirty years. But when Jose travels back to Mexico to visit his dying mother and does not return, Cantu discovers that the border has migrated with him, and now he must know the whole story. Searing and unforgettable, The Line Becomes a River makes urgent and personal one of the most divisive issues we face, bringing home to us the violence wrought in the name of "protection" on countless migrants' lives, and on the humanity of us all.